Ōishi Kuraudo is a character in the Higurashi no Naku Koro ni series. He is an old detective who works for the Okinomiya Police Station. For the past five years, he has been trying to prove that the Sonozaki family is behind the strange incidents that occur about the same time as the Watanagashi Festival, and has become increasingly persistent as his retirement draws close. He usually appears not long after the first murder occurs in a given arc, where he will ask driving questions to main character of the arc. The questions and his theories often fuel their building paranoia.

Ōishi was born and raised in Okinomiya. His real father was killed when the plant he was working at was bombed during World War Two at Nagoya.

He did not get along with his father, but still missed him greatly. In the time after the war, he was set to investigate the black market and prevent people buying food illegally. There was a severe food shortage, and he was not proud of what he was doing. At that time he met a man who became like a second father to him. In the anime, he refers to this man as his father when it is revealed that the man was the manager of the dam construction project. During a fight provoked by his employees, whom he'd been scolding for drinking on site, the man lost control of his temper and viciously counter-attacked them. He was lynched and dismembered by those employees. He was considered the first of the annual victims of the curse, and Ōishi came to believe that the Sonozaki family, at the head of the anti-dam movement, were responsible for this.

Ōishi will stop at nothing to solve the serial murders, and believes the entire village to be in on it, with the Sonozaki family at the center. Due to this, he is hated by most of the village, particularly Mion, who firmly believes in her family's innocence. Even though Ōishi suspects the entire village as the culprits, ironically, the villagers themselves suspect that he could be the culprit, even going as far as calling him "Oyashiro-sama's messenger." This is due to fact that Ōishi happened to come in contact with each of the victims of the curse shortly before their deaths, leading the villagers to believe that he chose them.

In arcs where we witness him going into retirement, he takes his elderly mother and they move back to the city of her youth. He has long wanted to fulfill this wish of hers. Most sources say this was in Hokkaido, one or two manga arcs specify it as Sapporo.

However, even after his retirement, he is still determined to find out the truth of the Great Hinamizawa Disaster, and together with Akasaka, he writes a book titled Higurashi no Naku Koro ni compiling all of the events that occurred in Hinamizawa, in the hope that the events would not be forgotten, and that they would one day be solved.

Ōishi is a muscular, yet somewhat overweight elderly man with short, grey hair and green eyes. Ōishi is rarely seen without a cigarette, since he is a chain smoker. He even lights his cigarette in the hospital where Maebara Keiichi is treated in Watanagashi-hen, and when Keiichi tells him that this is a non-smoking area, he merely opens the window to let the smoke out.

During his police duty, he wears a cream-colored suit and a black collared-shirt with a red tie and suspenders. Due to the summer's heat, he doesn't wear his suit jacket, rather holding it under his arm. In the visual novels, his shoes are dark brown; but in the anime, they are white. He also has a watch on his left hand.

Ōishi is initially portrayed as a fairly light-hearted, playful, and somewhat shady detective who is devoted and serious about solving the case, and at first seems to be a reliable ally to Keiichi. However, it is revealed in Tatarigoroshi-hen that he is capable of being extremely intimidating, and won't think twice about resorting to violence. His heavy determination about solving his case can also lead him to show signs of selfishness, such as when he attempted to use Keiichi's well-being to help uncover the mystery in Watanagashi-hen. 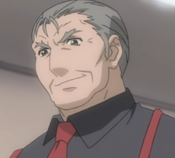 Ōishi's appearance in the anime 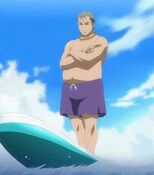 Ōishi surfing
The contributer of this deems him "the sexiest of the soul brothers." When They Cry Wiki does not judge.

Ōishi portrayed in the TV Show
Português do Brasil
Community content is available under CC-BY-SA unless otherwise noted.
Advertisement