Chie Rumiko is a character in the Higurashi no Naku Koro ni series and the sole teacher in the Hinamizawa School.

Chie Rumiko is voiced by Fumiko Orikasa and played by Hitomi Miwa in the live action movies. She is a parody of Ciel from Tsukihime, and even has the same voice actor as her. Chie is the teacher for Keiichi and his friends' class, the only one in the entire school. There, she follows her role as a teacher for the class until the inevitable Great Hinamizawa Disaster, in which she dies alongside many others in most arcs. She is also known to visit India many times a year to research the history of curry, and eat curry for every meal three times a day.

Chie, being a parody of Ciel from Tsukihime, has most of her character design borrowed from her. She wears a plain white dress with a red ribbon and a green jewel, and is always seen carrying a notebook.

Chie is a naturally kind hearted and gentle person, but she can become furious when anyone insults curry, or its history. This is made clear in the sound novel for Watanagashi-hen. The manga adaptation only touches upon it as a humorous aside, and the first two seasons of the anime do not mention it save in the light-hearted first episode of Rei. The third season does depict her school curry cooking competition in Cotton Deception Chapter Part One where her intensity surprises Keiichi and Mion. Her violent obsession earns her the nickname "Curry Demon."

Chie as seen in Higurashi no Naku Koro ni Jan

Chie portrayed by Hitomi Miwa in the live action movies 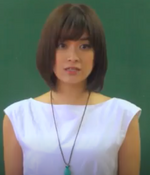 Chie as she appears in the live action TV drama 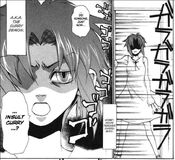 Manga representation of The Curry Demon
Português do Brasil
Community content is available under CC-BY-SA unless otherwise noted.
Advertisement