Furude Ōka (古手 桜花, Furude Ōka) is the daughter of Hanyū and Furude Riku. Though reluctant, she is the one who performed the Watanagashi ceremony on Hanyū, because Hanyū felt that Hinamizawa would become calm if she died. She created the chip on Hanyū's horn. Ōka most likely started the myth of Oyashiro-sama's curse. Rika is the direct female descendent of Ōka, which explains why she can always see Hanyū.

Rika and Ōka look very similar with the only difference being that Ōka's hair color has a more bluish tint and that she had a slightly different eye color.

It is noted that while Rika has light indigo hair with a purplish tint, Ōka has iris purple hair with a bluish tint.

Ōka is a caring individual who wants to master sword styles as she thinks that a fighting miko would be cool. Ōka states that she wants to be stronger, not in the sense of being powerful, but having a strong heart so that she can protect her village. Ōka believed her parents to be dead, and when she encountered Hanyū ten years after the demon had killed Riku, Hanyū taught her how to fight. She considered Hanyū a motherly figure, and soon after realized that Hanyū was in fact, her real mother. Ōka was deeply cared for her family, and had a husband named Shouji and a daughter named Fuuka. When Hanyū lost her senses and began to attack the villagers, Ōka attacked her mother and defended the villagers. As a response for Hanyū asking her why she would protect the very humans who captured and tortured her, and that humans are the lowest, vilest organisms, that they are garbage, Ōka said that she is also one of those humans and said that she would protect her village. After supposedly killing Hanyū, Ōka breaks down in tears over losing her family and opts to commit suicide, but Hanyū, who has returned to her senses, stops her. Hanyū then asks her to kill her before she loses her senses again, and Ōka tearfully and reluctantly does so. Ōka's family is later revealed to be alive, and she promises to protect her village.

Ōka before the murder of her mother in Kizuna.

Ōka on the cover of Kizuna 4. 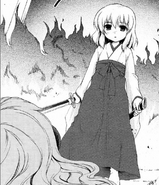