Hōjō Satoshi (北条 悟史) is a character in the Higurashi no Naku Koro ni series and the older brother of Hōjō Satoko. He is not present through the majority of the series but is the initiator of many of the events that take place in his absence, namely the serial murders committed in Watanagashi-hen and Meakashi-hen.

Satoshi is a quiet and soft-spoken person who is kind and seemingly calm, although he clearly worries about his younger sister and seems to get frustrated or discouraged rather easily. Both Sonozaki Mion and Irie Kyōsuke describe him as an airhead who has trouble focusing for very long. Satoshi is in the same grade as Mion.

Satoshi and Satoko's mother and step-father died in an accident on the night of the Watanagashi Festival and became the second recorded victims of The Series of Mysterious Deaths. The two of them fell from a viewing platform and into the river — the stepfather's body was recovered, but their mother's was never found.
After his parents' death, Satoshi's aunt and uncle, Hōjō Tamae and Hōjō Teppei became their foster parents, but having the children and thus the town's hatred thrust upon them so suddenly ended only in resentment towards their new charges. Both Satoshi and Satoko were abused by their relatives, though Satoshi often took the blows for his little sister. This is only revealed by Sonozaki Shion, as she was always concerned that while Satoshi didn't want to make a fuss, Satoko cried and got attention and sympathy, even though Satoshi was ill as a result of the abuse.

Between the constant abuse, his sister's distrust of almost all adults and outsiders, and the town's ostracization of the Hōjō family, Satoshi comes to believe he was the only one who could protect his sister. Despite his best efforts, Satoko still suffers a mental breakdown. The stress from the abuse to both of them triggers Satoshi's Hinamizawa Syndrome. He begins to suffer from headaches, depression, and hallucinations similar to the ones Keiichi experiences in Onikakushi-hen: he hears footsteps following him and believes that the village plans to kill him. According to Meakashi-hen, he murders his aunt in retaliation for abusing Satoko and to prevent future abuse. While the Sound Novels suggest that he may have witnessed his aunt's death, the anime depicts Satoshi killing her. Matsuribayashi-hen reveals that the "drug addict" who supposedly killed his aunt was only a scapegoat set up by the Yamainu on Irie's order to cover up Satoshi's disappearance and complicity. Ultimately in most arcs, he appears to have succumbed to Hinamizawa Syndrome and disappeared.

In the Question Arcs there remains uncertainty as to where exactly Satoshi disappeared. According to the TIPS in Meakashi-hen, he was last seen at a Nagoya train station boarding the Shinkansen bound for Tōkyō. However, no solid evidence exists to confirm that rumor, and it is most likely a false tip to justify the expansion of the police's search range. It also conveniently explains away his failure to reappear. This proves similar to Sonozaki Mion ordering a false report in Tsumihoroboshi-hen, to cover for Ryūgū Rena. The police in Meakashi-hen claim that such tips are coming from "reliable sources." The later Answer Arcs Matsuribayashi-hen and Miotsukushi-hen reveal revealed that Irie keeps Satoshi under heavy sedation in the underground parts of Irie Clinic.

Satoshi appears in the OVA version of Batsukoishi-hen as part of a dreamlike sequence. He serves yogurt to Keiichi as part of a punishment inflicted by their club while saying things that seem flirtatious. This does not confirm whether or not he is out of the hospital after the events in Matsuribayashi-hen.

In the ending of Miotsukushi-hen however, Irie successfully developes a sufficient cure for Satoshi, allowing him to finally reunite with both Satoko and Shion.

Satoshi has blond hair and usually red-violet eyes, though like his sister their color changes depending on the artist. He is one year older and slightly taller than Keiichi. He is only depicted wearing his school uniform which consists of a white collared shirt with a light blue undershirt, black pants, a belt and black shoes, his baseball uniform, or a hospital gown in the Irie Clinic.

Satoshi somewhat resembles Maebara Keiichi, mostly in terms of height and hairstyle, and the two are compared throughout the series. In actuality, he is more similar to Otobe Akira, who is twice mistaken for Satoshi.

Satoko is Satoshi's younger sister. Before his disappearance, Satoshi looked after Satoko and tried to protect her from their abusive aunt and uncle, who assumed guardianship after the death of their parents. In a desperate attempt to help Satoko, he killed (or thought he killed) their aunt after luring her out into the woods. It is implied that Satoko does not know about Satoshi's involvement in her aunt's death and even more strongly implied that she does not know where he is or whether he is alive, but she maintains the hope that he will return someday. There is much evidence Satoshi cares for his sister (at one point, for example, instead of using the money he had to run away from Hinamizawa, he bought a teddy bear Satoko wanted), although he has stated that at times he wishes, or at least wonders what it would be like if, he did not constantly have to take care of Satoko. Even though this he still loves Satoko and Satoko returns his feelings.

Shion has deep feelings for Satoshi, and these feelings are the main reason she commits the majority of her murders in Watanagashi-hen and Meakashi-hen, in order to "avenge" Satoshi's "death". Whether he returns her feelings or not is undetermined—he was usually too exhausted from taking care of Satoko to pay much attention to her and did not know Shion even existed for some time after they met, as when they spoke Shion was usually disguised as Mion. Once he learns about the existence Shion, however, he tells her he thinks "Shion" is a nice name.
Before his disappearance, Satoshi asked Shion (disguised as Mion) to watch over Satoko for him when he was gone, a promise Shion remembers too late in Watanagashi and Meakashi-hen. In subsequent arcs, however, she keeps his last wishes in mind and maintains a sister-like bond with Satoko.

Mion and Satoshi appear to be friends, and Mion invites both Satoko and Satoshi to an after-school club to help distract them from their unpleasant home life. However, Satoshi is often quite curt when speaking to whom he believes is Mion, but whether this is because of his high levels of stress at the time or general impatience with Mion is undetermined.

In Meakashi-hen, Shion suspects that Mion too is in love with Satoshi, since the sisters often like the same things. Later in the arc, Mion reveals to Shion that she also loved Satoshi and suspected that their grandma killed him, due to that, she tried to strangle Oryo, however, Oryo said that neither Satoshi's disappearance nor the cases related to Oyashiro-sama's curse were the Sonozaki's doing.

Mion says to Shion before Satoshi disappears that only Shion can reach him, meaning that she gave up Satoshi for the sake of her sister. (It's speculated that this may be the reason Mion doesn't want Shion to get along with Keiichi since that would mean the sisters' rivalry)

Rena's and Satoshi's presences do not overlap for very long, but in the time they are together they bond over their shared experiences with Oyashiro-sama and mental instability, though Rena's had largely passed and Satoshi's was just beginning. Rena later regrets not doing more to help Satoshi with his problems and preventing his disappearance.

Keiichi and Satoshi never meet in the official arcs, though most likely if Satoshi ever came back they would have a rough start. Keiichi harbors some animosity towards Satoshi for abandoning Satoko and sees him as unreliable and generally a bad person, though these feelings are lessened in Minagoroshi-hen. On the other hand, in Outbreak, his weilding Satoshi's baseball bat makes Keiichi believe that his "spirit" protect him when it comes to fighting to protect his friends, especially Satoko. However, in Batsukoishi-hen, Keiichi dreams about hallucinating of Satoshi and him being punished by the girls into acting out yaoi scenes in bunny maid outfits, much to Keiichi's chagrin. In Ayakashisenshi-hen, Keiichi and Satoshi are shown at the beginning of the episode to have already become best friends, though the time at which this OVA takes place is unknown.

Before the accident that killed the Hōjō parents, Irie was concerned about Satoshi's health and how it was deteriorating under the stress of ostracization. In an effort to improve his emotional environment, Irie convinced Satoshi to join the Hinamizawa Fighters. Despite initial resistance on Satoshi's part—claiming he would rather read than play sports—he became a faithful member of the team, though once Tamae began abusing Satoko, he started to consider leaving and eventually stopped going to practice. Irie was one of the few adults Satoshi could trust, and after he succumbed to the Hinamizawa Syndrome, Irie saved Satoshi from death by sedating him and treating him deep in the Irie Clinic. 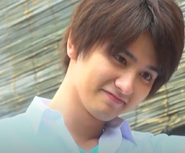 Satoshi as he appears in the live action TV drama
Deutsch Português do Brasil
Community content is available under CC-BY-SA unless otherwise noted.
Advertisement