Hōjō Teppei is a character in the Higurashi no Naku Koro ni series. He is the husband of Tamae, the abusive uncle of Hōjō Satoko and Hōjō Satoshi, and the antagonist of Tatarigoroshi-hen, Tsumihoroboshi-hen, Minagoroshi-hen, Tsukiotoshi-hen and Miotsukushi-hen.

Teppei is Hōjō Satoko and Satoshi's uncle and foster father. He and his wife Hōjō Tamae were forced to take care of Satoko and Satoshi after the death of their parents, but they abused them. He currently lives in Okinomiya. According to Kasai Tatsuyoshi, he is a procurer and uses his lover Mamiya Rina to swindle men out of their money. In Tatarigoroshi-hen, he is killed by Maebara Keiichi as an attempt to protect Satoko, and by Ryūgū Rena in Tsumihoroboshi-hen when he tries to blackmail her father. Sonozaki Shion contemplates killing him in Minagoroshi-hen to protect Satoko, but is stopped by Keiichi before she can make the same mistake. However, in Tsukiotoshi-hen Keiichi doesn't stop Shion, instead teaming up with her and Rena to kill Teppei and just like in Tatarigoroshi-hen, it's Keiichi who gives the final blow. In the other game only arc, Miotsukushi-hen, he was killed by Takano Miyo.

Teppei is the brother of Satoko's last adoptive father, and although he has been married to Tamae for quite awhile, he spends most of his time with his lover, Rina. Whenever he spent time in the Hōjō household, he usually just watched TV or slept. Tamae was suspicious of his infidelity and subsequently took it out on Satoshi and Satoko. After Tamae's death, Teppei went to live with Rina for a year.

He and Rina are known for playing badger games and loan sharking. Typically, Rina starts a faux relationship with different men and persuades them to spend money on her, until Teppei "mysteriously finds these men with his girlfriend," usually while they are in bed together. After severely beating the victim, he forces them to pay blackmail money. As a loan shark, Teppei sets a harsh interest rate that eventually compels his victims to take further loans and sign over property to Rina. Rena's father is caught in the badger game in Tsumihoroboshi-hen, prompting Rena to take action.

Rina very often becomes rebellious which Teppei dislikes. During Tatarigoroshi-hen and Minagoroshi-hen, Rina is killed by yakuza implied to be under the Sonozaki family's control. Teppei flees to Hinamizawa to hide for a while. During this time, he moves in with Satoko in her family home and forces her to be his servant. He also brings over several friends to play mahjong and drink. The sound novel specifies that Teppei is unable to enforce his authority without using scare tactics. His main threat to Satoko is that he will destroy Satoshi's room. In Tatarigoroshi-hen, he is killed by Keiichi after being lured out to the forest in order to "pick Satoko up from the police station." The only arc in which he has been successfully arrested for child abuse is Minagoroshi-hen.

In Higurashi no Naku Koro ni Sotsu, after a deep personality change, Teppei starts to act as a protective and kind uncle to his niece, but eventually he also ends up dead, this time by Satoko herself, now converted into a "witch".

Teppei is a vulgar, short-tempered, violent, and abusive man. His backstory remains unknown to a large extent. He appears in the story supporting his wife in her resentful and abusive behavior towards Satoko and Satoshi, both of whom are seen as a nuisance to exploit for housekeeping and gaining access to money held by their late parents. Theirs is a loveless marriage of convenience: Teppei runs his scams and loansharking with Rina and frequently spends time with her.  As depited in the arcs, Teppei is a sociopath. He has no moral nor ethical qualms with cheating others out of money and resorting to regular physical and verbal abuse against Satoko. In his violent role, he does not appear as intelligent as his partner Rina; however, he is not a complete idiot. He knows how to play the role of intimidation to debtors and marks to lead them fall further in debt to Rina and himself. He recognizes Satoko's devotion to the memory of her brother and uses this to prevent her from running away or telling the truth to social workers. Nevertheless, he lacks forward planning, behaves rashly, and is a coward. Though he knows he was not involved in his wife's death, he immediately flees to avoid suspicion and whomever he thinks may have killed her. Similarly, he flees Okinomiya when the yakuza catch Rina. He starts beating Satoko under the assumption that, somehow, there are yet more hidden bank accounts from her parents. In Hinamizawa without his attractive scam partner, he spends the majority of his time playing mahjong and drinking alcohol with his friends while Satoko does all of the shopping and housework.

However, in the sixth episode of Satokowashi-hen, memories of his deaths in other worlds end up affecting him, and making him realize that only a despicable and lonely ending awaits him in the face of his destructive behavior. An encounter with his niece at that moment reveals an unexpected aspect of him, showing altruism and compassion very similar to that of Satoshi, in defending Satoko from being attacked by bullies. Thus far in subsequent episodes of Gō, his change appears legitimate and consistent.

In Sotsu, Teppei then becomes a useful "pawn" for his niece's dark purposes. Throughout all the arcs up to Tatariakashi-hen, he demonstrates a gentle and servile nature to his niece, acting fully in search of redemption for the terrible things he's done, including asking Ōishi for help in helping to protect his niece from the girl's supposed alienation of the village. These actions even extract humanity from Satoko during the events of the Tatariakashi-hen arc, leading to a momentary crisis of her actions.

Teppei as he appears in the anime adaptation

Teppei as he appears in the live action TV drama 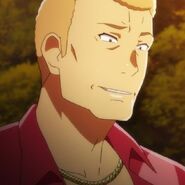