These sound novels—often abbreviated SNs or VNs (visual novels)—were written and illustrated by Ryukishi07 while his brother, Yatazakura, scripted them into NScripter.

The term "sound novel" is used for the original Higurashi games, instead of the more proper term "visual novel", because, while the art may seem lacking and simple, the wide range of sound effects and music set the atmosphere for the reader. One notable sound effect used throughout the entire series is the chorus of higurashi, a kind of cicada, which is played at the main menu and throughout many scenes.

With every subsequent arc's release, the previous arcs would be included as well. For example, Tatarigoroshi-hen's disk contains both Onikakushi-hen and Watanagashi-hen. Additionaly, one new mini-game would also be added.

Himatsubushi-hen's disk is the most common and easiest to find of the question arcs primarily because it was the first one to be mass-manufactured. Before then, the disks were manually created by 07th Expansion in very limited quantities using writable CDs, with the CD and case art being printed on printer paper and manually applied. There are three distinct versions of Himatsubushi-hen from its original production run: a Comiket version which was created manually in the same way as the other question arcs, a pre-mass production run produced on-site by bookshops and other third-party retailers, and the mass production run which is the most common version and adheres to a more professional standard.

The first release, Higurashi no Naku Koro ni (which contains all four question arcs) was released in December 2009. The first Answer arc, Meakashi-hen, was released February 2010, and all three remaining arcs were released individually throughout the year, with the final arc, Matsuribayashi-hen, being released in July. All games are available for download-only. The extra arc Rei has not yet been translated.

Because of certain issues, some modifications were made for the release, these include:

MangaGamer would later go on to release the Hou version of Higurashi on Steam, with different BGM and SFX.

The Sound Novels have been officially translated by Saffran Prod in French, as Le sanglot des cigales, ("The cicadas' sob"), the "sang" part written in red is a pun with "blood."

Compared to the English release, nothing has been removed from this version of the sound novel.

The extra arc Rei has not yet been translated. 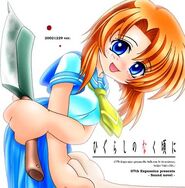 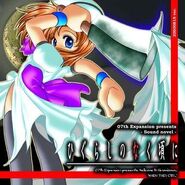 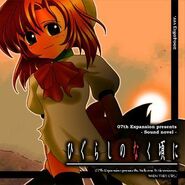 Himatsubushi-hen's Cover, this is the most common version of Higurashi to find.
Deutsch Português do Brasil
Community content is available under CC-BY-SA unless otherwise noted.
Advertisement