The game features a new, Umineko-esque opening movie accompanied by the song Ano Hi e (あの日へ・To That Day), created by Higurashi veterans dai and Yuzuki, as well as at least two new additions to the cast. The game reuses the original sprites, with the addition of new sprites for the expanded cast drawn by Ryukishi07 in the style of the old sprites.

The game was released in Japan on August 17th, 2014 at Comiket 86, as a "thank you gift" to fans of the series, and it includes the 8 main arcs with Rei, plus Hinamizawa Teiryūjo (Hinamizawa Bus Stop), an original Higurashi Outbreak story, and a brand new arc called Kamikashimashi-hen (神姦し編・Boisterous Gods Chapter).

MangaGamer plans to release all 14 arcs contained in Hō on Steam in English/Japanese bilingual versions with remade sprites and CG drawn by one of their artists and a brand new English translation. It is very similar to the original release of Higurashi by MG back in 2009, with each arc getting their own individual release. It remains to be seen if this will be the case for the Rei and Hō arcs.

The Question Arcs initially used the tracks and SFX from the original 2004 releases, while the Answer Arcs utilized a mix of both the original Kai tracks and some MangaGamer original tracks (this was purportedly unintentional and was fixed[1]). Both were updated in April 2019, with some updated tracks and SFX being ported from the Japanese version of Hō while others were replaced with new tracks at 07th Expansion's request.[2]

This release also features Trading Cards and Badges for games up until Minagoroshi, and Steam Achievements for all games.

Entergram, a subsidiary company of Technical Group Laboratory, Inc. that bought part of Alchemist's assets announced that they would be porting the game to the Nintendo Switch, which released on July 26th, 2018 in Japan. A PlayStation 4 version of the game was later released on January 24th, 2019.

This version includes the arcs Higurashi Outbreak, Kamikashimashi-hen, Hinamizawa Teiryūjo, Batsukoishi-hen and also all the content from Sui, totalizing 23 arcs.

The Entergram version uses the upgraded sprites and backgrounds from Higurashi no Naku Koro ni Sui, as for the Hō arcs, Higurashi Outbreak and Kamikashimashi-hen received new sprites and CGs drawn in Alchemist's style. Additionally, the entirety of Hinamizawa Teiryūjo was given brand new sprites, CGs and artwork, all drawn by the artist Tomozo, who illustrated the original manga version. The Entergram version's opening theme is "Bokutachi wa Mō Shitteru" and is performed by Matsuzawa Yumi.

Higurashi's only CG, redrawn by MangaGamer 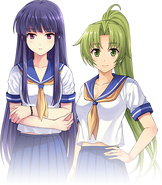 Cases for the regular and limited versions of the Switch game

Português do Brasil
Community content is available under CC-BY-SA unless otherwise noted.
Advertisement