Hinamizawa (雛見沢) is a fictional village (雛見沢村・Hinamizawamura) and the main setting for the Higurashi no Naku Koro ni series. It is located in the Shishibone City, adjacent to Gifu Prefecture where its inspiration exists. The village becomes known for carrying the unusual fictional disease called the Hinamizawa Syndrome.

It is later revealed – Arg! – that there was never actually a curse; it was invented long ago to discourage people from leaving the village and triggering the symptoms of Hinamizawa syndrome and for people to enter it and contract and, potentially, spread it if they leave.

Shirakawa-go was also used as the base for the Hitogata Settlement in the mystery visual novel Kara no Shōjo 2. This makes Kara no Shōjo 2 and Higurashi's villages have striking similarities, including almost identical village overlook shots. 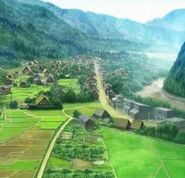 Hinamizawa in the anime 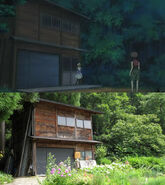 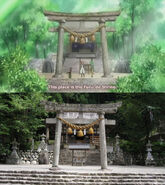 View of Shirakawa from Shrine

Hinamizawa in the night

The village at night in Matsuri

Panorama from one of the mountains

One of the streets