Kimiyoshi Natsumi is the main character of Onisarashi-hen, and the two Higurashi no Naku Koro ni Kizuna Arcs: Someutsushi-hen and Kagebōshi-hen. She makes a cameo appearance in the Matsuri version of Miotsukushi-hen while Hōjō Satoko is unconscious in bed and appears as a character, together with Minai Tomoe, in the Kizuna version of the same arc.

Natsumi is the daughter of Kimiyoshi Haruko and Kimiyoshi Tōji, the granddaughter of Kimiyoshi Aki, and a relative of Kimiyoshi Kiichirō. Her family recently moved from Okinomiya to Kakiuchi city with her grandmother, who is a native of Hinamizawa and a devout believer of its local deity, Oyashiro-sama. Despite being a shy and refined girl, she quickly befriended two of her classmates, Saeki Chisato and Makimura Tamako. In most arcs, Natsumi is also shown to later become the wife of Tōdō Akira, the childhood friend of Tamako and Chisato.

Natsumi has dull green hair, which she keeps tied in two buns, while some of her hair are seen sticking out, and has brown eyes. She wears the same school uniform as Chisato and Tamako. On causal days, wears a light pink shirt with three, small, and thin black stripes that run down vertically and wears short, similar sleeves. She also wears a short, navy blue skirt with a light colored checker board pattern on it. In her second casual appearance, she wears a blue frock with a thin, red neckline and a white jacket with a grey checker board pattern on it. She has the longest hair in the series, even longer than Sonozaki Mion and Sonozaki Shion.

At first, Natsumi is shown to be a silent and refined, maybe even an antisocial girl. Due to recently moving from Okinomiya, she doesn't have many friends in Kakiuchi, except for Tamako and Chisato. Even though she had good grades in Okinomiya, she is shown to struggle with her studies in Kakiuchi, due to the sudden change of her environment, and her new city's stricter education system. Despite her hardships, she is shown to be a diligent and hard-working person, who often pulls out all nighters to prevent her studies falling behind. She is also shown to deeply care for her family, and in Someutsushi-hen she even gets a part-time job at the Saeki Hospital to buy an expensive anniversary gift for her parents.

She is often shown to be self-conscious about her Hinamizawan origins and lack of self confidence due to being from the countryside. In most arcs she expresses hatred towards Hinamizawa after the Great Hinamizawa Disaster, since the disaster and her bloodline messes up her peaceful, everyday life, but in Someutsushi-hen and Kagebōshi-hen, she is shown to be quite nostalgic towards her early childhood years in Hinamizawa.

As it was mentioned before, Natsumi's other personality is cunning, manipulative, and smart, but deranged and emotionally impulsive at the same time. the other personality is also shown to be vengeful, since in Kagebōshi-hen, she pushes Natsumi to assault Chisato, for calling the police on her. The other self is also shown to be suicidal, since after Natsumi murdering her own parents, it simply tells Natsumi that "even I can't save you from the police now" and "suicide is the best option at this point".

Natsumi's other personality is shown to be quite similar to Sonozaki Shion's "demon self" in Meakashi-hen. At the end of Someutsushi-hen, Natsumi also calls this other personality a demon (oni). It may be just a coincidence, but it's also possible that the Hinamizawa Syndrome affect people from the Three Great Houses differently, due to their bloodlines.

After the Great Hinamizawa Disaster, many former Hinamizawa residents begin to act strangely. Ōishi Kuraudo and Akasaka Mamoru come to Natsumi's house to talk to her grandmother whom they heard was from Hinamizawa. At the time, however, she isn't home. She is taken to a restaurant and is questioned by them. Akira comes by them and says that people wearing school uniforms can't go inside restaurants. Outside, Natsumi thanks him, and he volunteers to take her home. Upon arriving at her house, there are talismans all over it. Akira walks away, and Natsumi runs into her house. Her grandmother is performing rituals to cleanse her family (such as drowning puppies), and she calls her mother. The next day, she tells Akira that her family is related to the Hinamizawa incidents, and he believes her.

One day, after arriving home from school, she sees her grandmother being attacked by Haruko. In the end, her grandmother dies. Haruko suggests cutting her into small pieces, so they can hide her better. At school, the next day, her friends notice her behaving strangely and note that there's a rumor circulating about Natsumi being from Hinamizawa.

On her way home from school, she sees a news cast about a body of an elderly woman being found. Upon arriving home, she sees her mother beating her father for hiding the body in an easy-to-find spot. After she leaves the room, Natsumi's father suggests calling the police. However, Haruko comes back into the room and stabs her husband's neck. Then, she decides to kill Natsumi.

Akira calls Natsumi's house from a payphone and hears someone screaming for help. Upon arriving at Natsumi's house, Haruko seemingly strikes him with a vase. Natsumi tries to wrestle the knife out of Haruko's hands and Haruko accidentally slices her own neck open in the struggle. Natsumi is rescued by Akasaka and the police and Natsumi apologizes to Akira for lying to him.

Later, when Akira confronts her, it is revealed that Natsumi's testimony was fabricated, and she was actually the one who killed her family. In a fit of psychosis, she ends up stabbing him in her confusion. However, shortly afterward, she realizes that Akira is the only important thing she has left.

In Onisarashi-hen's epilogue, it is revealed that Natsumi was being cared for by other members of the Kimiyoshi family for a few years. However, they believed she was cursed by Oyashiro-sama and had her locked in a room filled with talismans, bound and blindfolded. Akira saves her and they get married and move to a small, rural town. She was too unstable to live in a house, so she lives in a local clinic where Akira visits often.

After being saved from the Kimiyoshi family by Akira, Natsumi wakes up in the clinic in a daze, seemingly with no memory of the incident, Akira tells her that he was the one responsible for murdering her family, because he does not want her to know the truth, believing it would hurt her even more.

Natsumi supposedly accepts this new "truth", but later, when visited by Akasaka, she confesses that she remembers everything, and that she knows Akira is lying to her about the incident, yet she keeps this a secret from him. She apologizes for ruining Akira's life, and the arc ends with her smiling, hand-in-hand with her husband.

Natsumi has liked Akira ever since she first saw him, although her complexes prevent her from revealing her feelings to him, even when he confesses that he likes her. She desperately tries to hide her dark secrets from him fearing he might come to hate her. However, Akira forgives her for killing her family and even for stabbing him in the stomach. Later, in the epilogue of Onisarashi-hen, they are now married, and he even goes as far as trying to convincing her it was he himself who killed everyone to relieve her guilt.

Chisato is one of the first people to talk to Natsumi in school and becomes one of her best friends. She often teases Natsumi due to her innocence and makes brash jokes at her expense. However, she cares a great deal about Natsumi and her happiness and is fiercely protective of her. Natsumi also sees Chisato as a best friend, despite her paranoia and anxiety often painting her in a negative light.

Tamako is Natsumi's classmate and is a best friend to both her and Chisato. Tamako often intervenes when Chisato's teasing goes out of hand and defends Natsumi as a level-headed mediator. Tamako appreciates Natsumi's innocence and also cares deeply about her, being sensitive to her needs and emotions.

In the games, it was revealed that Mion and Natsumi know each other. Despite living in Hinamizawa, Mion was often seen working part-time in Okinomiya, where she sometimes encounters Natsumi. Depending on the player's choices, in Higurashi no Naku Koro ni Matsuri, Natsumi may appear on the Watanagashi Festival where she has a friendly chat with Mion. In Someutsushi-hen, Natsumi reveals that she has always looked up to Mion and was even a bit jealous of her for being the firm, leader type who is able to have conversations with adults like equals, even though they were far older than her.

Natsumi in Miotsukushi-hen of Higurashi Kizuna

Natsumi with Chisato and Tamako 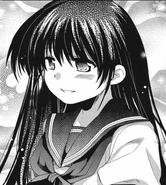 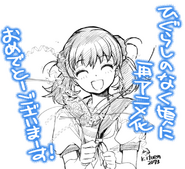