Maebara Aiko is Maebara Keiichi's mother. She first appears in Onikakushi-hen along with her husband, Maebara Ichirō. She is rarely seen or fully depicted in the first two seasons of the anime, but she appears various times throughout the manga adaptations. In the the first two seasons, like her husband, her face is not fully shown; however, her hair is depicted as brown and shoulder length. In the new third season, she appears frequently.

In Tatarigoroshi-hen, Keiichi  reveals that she is very fond of detective and crime novels including the Agatha Christie classics And Then There Were None and Murder on the Orient Express. She also wrote a crime novel once and contributed to a crime novel contest. She describes requirements of the perfect crime to Keiichi which helps him to murder Hōjō Teppei. As is described by Ōishi, she graduated in a "humble women's university."

Aiko as she appears in the anime adaptation

Aiko portrayed by Yōko Hoshi in the live action film 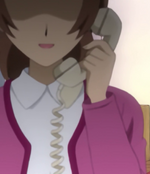 Aiko portrayed in the TV Show

Third Season: Fuller View
Add a photo to this gallery
Retrieved from "https://whentheycry.fandom.com/wiki/Maebara_Aiko?oldid=38367"
Community content is available under CC-BY-SA unless otherwise noted.