Mamiya Rina is a pink-haired woman who works primarily as a showgirl (though on paper as the private manager) in a Sonozaki-run establishment called the Blue Mermaid. Hōjō Teppei is her lover, and most likely her pimp. He lives in her apartment, and most likely off her 'wages' as well. Together they get money from men through a variety of schemes and blackmail techniques. She does not really show up recognizably until Tsumihoroboshi-hen, where she has gotten together with Ryūgū Rena's father in what will ultimately be an attempt to extort money from him. When Rena realizes this, she confronts Rina in the junkyard. Rina, not one to take such things lightly, attacks her. After injuring her with a piece of glass, Rena manages to kill Rina with a lead pipe, triggering the reemergence of Rena's syndrome.

In most arcs, her death is simply what causes Teppei to return to Hinamizawa. Not surprisingly, Rina is in with some bad characters. She was involved in an attempt to steal money from the Sonozakis with some former members of their group. Based on the TIPS from the games, she was being pursued by the Sonozakis who catch up with her just as the culprits are about to make their get-away. In these arcs, she is the only one noted as getting caught, and was most likely tortured to get information on the others before she was finally killed in a way reminiscent of the ancient Watanagashi-type rituals of ancient Hinamizawa. It is her body we see in the storm drain at the beginning of Tatarigoroshi-hen. Even though Teppei was never a part of the scheme, as she thought him too stupid to be of any use, he was still closely tied to her, so her murder causes him to return to escape what he fears will be a yakuza retribution on him.

Rina appears as a young attractive woman with bubblegum pink hair and pinkish red (or simply pink, depending on the media) eyes. She wears a golden tube top and pale pink jeans. In her first Alchemist sprite, Rina is seen wearing a purple miniskirt with a pink bow and a golden key-shaped necklace. Her original sprite has a visible star-shaped tattoo on her midriff which is retained in the anime adaptations. Rina's presence is usually easily detected because she uses a characteristic perfume, whose scent is specifically disliked by Rena.

As a deceitful scammer, Rina acts as a sweet, friendly, and loving person, to hide her ruthlessly manipulative nature. Driven by money, she uses her sex appeal to obtain it and gifts from men she primarily meets as a hostess or through her partner Teppei. Along with directly eliciting money and gifts from her marks, she runs loan sharking, "the badger", and other intimidation scams with Teppei. In Tsumihoroboshi-hen Rena realizes that Rina is both a great listener and comforter who can easily gain trust, including Rena's father's. Although Teppei's violence is considered to be the essential part of the badger games, Rina seems to be more intelligent than her partner and often creates her plans without informing him. Despite her shrewdness, Rina also appears to be rash, as she easily involves herself in exceptionally dangerous and risky actions, like stealing the funds of yakuza. While she may appear to depend on Teppei to provide the threats, Rina has no qualms about resorting to violence herself. When she meets Rena at The Dump, she confessed that she had "hoped" she would not have to kill Rena, but it is clear she was always prepared to do so.

However, in Oniakashi-hen, a different side of her was shown. While she still uses Rena's father to buy her expensive drinks, she also feels guilty about it, especially because she considers Rena a kindred spirit, who is being raised by a single parent, just as she had been. Rina eventually visits Hinamizawa, tries to befriend Rena, then asks her to convince her father to break off their relationship. Unfortunately, already at L5 at this point, Rena murders Rina at the dam construction site.

Rina as she appears in the anime adaptation

Rina as she appears in the live action TV drama 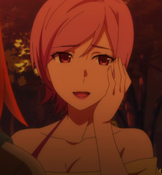 Rina in Sotsu
Português do Brasil
Community content is available under CC-BY-SA unless otherwise noted.
Advertisement