Higurashi no Naku Koro Ni Wiki
Register
Don't have an account?
Sign In
Advertisement
in: Characters, Males, Females,
and 4 more

Mr. and Mrs. Furude were the parents of Furude Rika and the victims of the third year in The Series of Mysterious Deaths, presumably dying of an unknown illness and suicide respectively. Mr. Furude was the head of the Furude Family and was in charge of the Saiguden. He forbids his young daughter from entering the Saiguden. In Himatsubushi-hen he spanks Rika after he mistakenly thought that she snuck into the Saiguden and broke a section of Oyashiro-sama's statue, though it was really Satoko.

In the manga version of Saikoroshi-hen, Rika who has become accustomed with her parents having died in her more recent time-lines, openly enters the Saiguden and is caught by her father. In the evening, she remarks to herself, "It still hurts . . . how long has it been since I last got a spanking?" and in the next morning she endures a lecture from her mother: "My mother's lectures never end! I always hated that about her!" Mrs. Furude is revealed to have had a rough relationship with her daughter and showed dislike to Rika's indifferent reactions to the events around her. This attitude on Rika's behalf is most likely due to the fact that she has endured those parts of her life hundreds of times over. The manga version of Saikoroshi-hen again expands on the source of this distance. As one example Rika's mother proves a not very good cook, and when she tries to teach Rika, Rika shows better skill having learned from living with Satoko in previous time-lines. Rika also admits that having given up on saving her parents she grew distant from them.

During the dam war, Mr. Furude took a neutral position on the matter and refused to take either side, which earned some animosity from some of the villagers. Though Shion thought that the priest acted mature for not being as overzealous as the others, Mion felt that he was responsible for causing even more unrest in Hinamizawa and that he should have gone along with the protesters in order to keep the village united.

To help save Satoko, Rika volunteered herself with the consent of her father as a test subject for Irie and Takano. Takano wanted to use Rika to further the research of the Hinamizawa syndrome, because the "Queen Carrier" status passed down through the females of the family, such as Mrs. Furude, though exact the exact details remain unclear. In both the anime and manga, Rika's mother becomes progressively opposed to Rika's involvement, and when Rika develops a high fever she demands the experiments end. Her father compromises by giving Takano and Irie three more months. Takano responds by having the Yamainu poison Mr. Furude so it would look like he died of heart failure. The anime version does not explain the full fate of Mrs. Furude. The Yamainu leave fake evidence to imply she drowned herself in the Onigafuchi Swamp and her body is never found. The manga explains that Takano performed a dissection on her alive and without any sedation or pain killers.

Mrs. Furude has dark indigo cut in a fringe which she keeps in a ponytail, as well as purple eyes similar to her daughter. She wears a pink and white dress. Her hair has a purplish tint like her daughter, which makes it appear a solid purple. 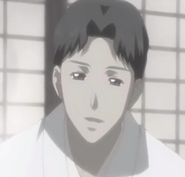 Younger Mr. Furude during a flashback in Saikoroshi-hen

The family in the Furude House

Mr. Furude waiting for Rika in the Irie Clinic

Rika and her mother in Saikoroshi-hen