Rena's biological mother started her career as a designer at a small clothing manufactory in Okinomiya, where she met Mr. Ryūgū. They married and lived in a small apartment in Okinomiya until Mrs. Ryūgū became pregnant; they then moved into Rena's paternal grandmother's house up until Rena started elementary school.

Around this time the manufacturer Mr. and Mrs. Ryūgū worked for began to have financial difficulties, so she began to consider going independent with a few other designers. The situation became complicated, but she received an offer to work at a design office in Ibaraki and took it. The company promised Mrs. Ryūgū a responsible project, since the firm had high expectations with her talent. When the family moved, Mr. Ryūgū had to give up his job and became a homemaker. The project became a large success, and Mrs. Ryūgū started coming home late every night or not at all.

Mr. Ryūgū was not doing well, and kept changing jobs. His role as a homemaker fell short due to his inability to cook amongst other things, so Rena began to take up the chores for him.

Rena's mother began to take Rena out places without telling her father, including barbecue parties with her coworkers. Around this time Rena's mother had developed an affair with a fellow designer known as Mr. Akihito. She had been drafted by a headhunter to work at a bigger company and was promoted to a higher position, and by this time was earning well into six figures. After taking Rena to a restaurant and eating parfaits with her (Rena's childhood dream), she wanted Rena to leave her father and come live with her and Mr. Akihito. Rena loudly voiced her disapproval, saying that she could continue her relationship with Mr. Akihito but was not allowed to divorce her father. This is when Rena's mother revealed that she was pregnant.

Rena's mother sent a lawyer to the household in Ibaraki many times but refused to meet him in any form, including over the phone. Mr. Ryūgū became depressed, as did Rena. One day, Rena met with her mother again, but did not speak to her; Mr. Ryūgū had given her a letter to give to her mother, but her mother did not read it when Rena asked her to. That meeting was the last time Rena's mother met with Rena.

In Tsumihoroboshi-hen, Mr. Ryūgū begins a relationship with Mamiya Rina. He met her at a gentleman's club in Okinomiya named Blue Mermaid, of which Rina is the private manager. He is not aware of her relationship with Hōjō Teppei and falls into their badger game trap. It is implied that the two had slept together, as Rina lies about being pregnant to lead him into the prospect of marriage. Before she can go into the final stage of the plan and have Teppei intrude while they are in bed together, Rena murders Rina. However, Teppei still attacks Mr. Ryūgū late after dark, and subsequently is also murdered.

In Minagoroshi-hen, a similar scenario was set to occur, but Rena talked to her father about the issue instead of taking matters into her own hands. Mr. Ryūgū also gets a new job in this arc. 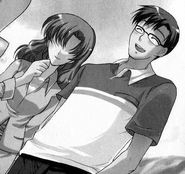 Rena's mother portrayed by Ryoko Takizawa in Higurashi no Naku Koro ni Chikai
Add a photo to this gallery
Retrieved from "https://whentheycry.fandom.com/wiki/Mr._and_Mrs._Ry%C5%ABg%C5%AB?oldid=30648"
Community content is available under CC-BY-SA unless otherwise noted.