Takano Miyo is a nurse at the Irie Clinic. She is one of the consistent victims of the curse in 1983. According to the police, her charred remains are found in a drum in the mountains; however, the autopsy later reveals that she had died twenty-four hours before the Watanagashi Festival had even occurred. During Tatarigoroshi-hen, she gives Maebara Keiichi a ride after he finishes his business with Satoko's uncle, and the subsequent revelation of her "death" prior to this incident shocks him.

She has long, blonde hair which she has had since a child. As an adult, her brown eyes are more "droopy" or closed than those of other characters. She is also quite buxom, which serves as occasional comic relief in the manga and the anime OVA arcs. In the clinic she usually wears a traditional nurse's uniform with hat. Outside she dresses casually with dark-green slacks with a light-green sweater over a light pink blouse. Over her left breast she wears her signature yellow cross on a gold-green ribbon. She will occasionally wear a dark suit when visiting her superiors. Her other signature outfit is the black uniform she wears when she takes charge and acts as her rank of major. While it varies with updates to the sprites, it consistently consists of a black beret, a black cape over a military uniform or black suit, and a black skirt. In the original sprite as well as in the anime, she retains the gold cross over the gold-green ribbon.

While very popular at the Irie Clinic where she works, her real personality is eventually revealed to be quite twisted. She enjoys frightening people with tales of Hinamizawa's past. She views people such as the inhabitants of Hinamizawa as guinea pigs for her research, and only truly cares for the memory of her grandfather. She is infamous for her fascination of the history and mythology of Hinamizawa, though Sonozaki Mion explains to Keiichi that Takano presents a different interpretation of Hinamizawa's mythology to every person. She once tells Hōjō Satoko that Oyashiro-sama originated from sea creatures, while in another story arc she gives Rena her research which contains the theory about parasites controlling people's minds, she also fuels Shion's distrust for her family in Meakashi-hen. She tends to speak in a very condescending and patronizing fashion which makes various characters dislike her at times, like Keiichi, Shion and Rika, even before her true nature is revealed. In the visual novels, she has a distinct laugh (くすくす・kusu kusu), which the MangaGamer version translates as "Hee hee hee."

She also has a cute, childlike side to her personality, as revealed in Minagoroshi-hen and hilariously depicted in the anime adaptation. When Furude Rika offers to open the Saiguden for her, Takano jumps for joy and spins round and round with glee. Rika muses that "Miyo's image stock just crashed all over the world."

Takano even offers to wear cat ears, a collar, and tail, and beg for milk if Rika will let her pass through the second door to the inside of the Saiguden. Hours after the trip at the conclusion of a budget meeting, Irie Kyōsuke and Tomitake Jirō witness her meowing and lightly hopping around the table as she holds the camera she used to take pictures of the Saiguden's torture tools.

Takano also has an obsession with attaining the level of a goddess. She first adopted the notion of becoming a goddess as a child when Takano Hifumi tells her that it was not Jesus' physical body that was resurrected, but the belief in his teachings. Hifumi believed that one becomes a god when one makes a great achievement that puts ones name in history. He expresses his desire to become a god by making a name for himself in the scientific community in proving the existence of Hinamizawa syndrome. After he dies, Miyo takes it upon herself to carry on his research and have it recognized by the world. Her ultimate goal is to become a goddess along with him. In Kai, she even tells Hanyū that she will drag her down from her “godly throne”.

Her quest proves insincere. When she loses, she is ordered to end her life and take the blame for the various killings and conspiracies. The manga expands the scene in that Hanyū visits her to offer her the status of a goddess if she simply ends her life. However, Takano cannot do this.

The new anime-only arcs of Higurashi no Naku Koro ni Gō introduce some changes. In the repeating time-lines which compare to the original ones, she does not appear to die on the night of the Watanagashi. Instead, she and Jirō disappear. It is eventually revealed that the two steal a van from the festival. In the conclusion to Nekodamashi-hen, Rika sees Jirō leaving the festival after its end. She pursues him to talk to him only to find he is meeting Takano. To Rika's surprise, Takano apologizes profusely for what she planned to do. She confessed it to engineer its prevention. She plans to escape with Jirō for her safety as a witness in the subsequent investigation. When Rika notes that the Takano she knew would never act in that way, Takano replies that if she explained her reasons, Rika probably would not understand.

In the later arcs and near the end of the first series of the anime, it is revealed that she arranges to have her death faked on the night of the Watanagashi Festival to throw off suspicion and allow her to act more freely. The second season reveals her past. Born Tanashi Miyoko, as a young child her parents died in a train accident. Left without any relatives, the government sent her to an orphanage where the staff continually abuse the children. She tries to escape and evades capture long enough to call her father's former professor, Takano Hifumi, as her father had instructed just before he died of his injuries. Recaptured, she witnesses the murder of one of her friends who organized the escape, and is then dragged to the bathroom where she is ordered to orally clean a squat toilet. Fortunately, Hifumi arrives just at that time to adopt her.

Hifumi becomes a sort of grandfather for her, and she cares deeply for him. Since his name can mean "1-2-3," Miyoko decides to take the name "Miyo" which can mean "3-4." He inspires Takano on the path of biological research by allowing her to help him with his study of Hinamizawa Syndrome. When Hifumi dies humiliated and discredited by his superiors, Takano vows to complete his research whatever the cost. She receives patronage from an old friend of Hifumi, Koizumi who betrayed him under pressure from various government groups. Wishing to atone for his betrayal, Koizumi gives her considerable financial as well as political backing which allows her to form a government research group under the guise of the Irie Clinic. She eventually secures the control over an elite squad of counter-intelligence soldiers called the Yamainu who carry out much of the killing scenes in the series, though she does not hesitate to perform some of them herself, including the murder of her lover Jirō and the children themselves in one arc.

It would seem that the child Tanashi Miyoko unwittingly chose to die with her parents; however, it is revealed that in this instance the tragedy does not happen. That becomes the ultimate "happy ending" since Tanashi Miyoko never becomes "Takano Miyo." The irony is that Takano chooses death for everyone but herself; yet in this final story, she chooses "death" for herself and, in effect, "kills" Miyo which saves everyone.

Takano also makes an appearance in this horror mystery light novel by Ryukishi07, published in 2007 and later as a manga. While the story is technically supposed to be considered separate from the Higurashi series, it was confirmed to have taken place in the perfect world of Saikoroshi-hen, where Frederica Bernkastel/Adult Rika intervened to prevent the death of Takano's parents. Takano's retains her original name "Tanashi Miyoko." The story also heavily focuses on her, as she is the first to be involved in another curse.

In the story which takes place at a normal city high school, Miyoko is drawn as an average, quiet girl with long black hair and a very melancholic expression, which contrasts heavily with her bright and bubbly nature as a kid. Compared to her personality as Takano in Higurashi, she can be considered just as creepy and dark, if not more-so. Her signature laugh and way of speaking is also retained in the novel. While Takano is at least seen to be "cute" and has retained some of her childish nature, no sign of such is ever apparent in Miyoko's character in this story. She is not very well liked in the school and only has a few acquaintances, including a strange boy named Tomohiro Miyajima. Initially, Tomohiro did not speak to Miyoko that often, and they only knew each other as those who often glanced at and took interest in each other. One day, Tomohiro decides to invent a fake curse called "Ohone-sama's curse" and circulate it around the school, mainly for kicks and for easy money, knowing that people would donate to the donation boxes dedicated to the false god. Of course, Tomohiro and his friends knew it was a mere prank, however, they receive a note attached with 50,000 yen (approx. $644 USD) that asks for the god to curse Miyoko.

Soon after, Tomohiro witnesses Miyoko's death by falling off the rooftop of the school; this is later suspected to be a murder, but near the end for reasons unknown, she reappears, seeming perfectly alive and well with no damage done to her body. She jumps off the roof a 2nd time, only to have Tomohiro catch her this time. In the end, she is seen dancing in a school classroom.

Takano as seen in Higurashi no Naku Koro ni Jan 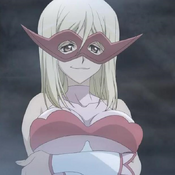 Takano portrayed by Ayako Kawahara in the live action movies

Takano as she appears in the live action TV drama

Takano apologizes to Rika for her plans in Nekodamashi-hen

Shown: "Don't Mess with the Takano!"