Tetsurō Okonogi is a villainous character in the Higurashi no Naku Koro ni series, and the leader of the Yamainu. He is hired to help Takano Miyo cover up the research on Hinamizawa Syndrome at first. At the end of Matsuribayashi-hen, he betrays her and surrenders to the Banken though in Nekodamashi-hen he reveals that it was always the plan to dispose of her after the successful activation of Emergency Manual 34.

Okonogi is cunning and clever, able to think through a complicated situation quickly. Considering how the Yamainu, under his control, were able to cover up a series of incidents (the kidnapping of the Prime Minister's grandson, the dam manager's death, Satoko's parents' falling incident, etc.) which may have uncovered the true nature of the Irie Institution, Okonogi's ability to think through these situations is unmatched. He is also easily corrupted by money, as Takano's bribing allowed him to assist her in the creation of the Great Hinamizawa Disaster. However, as shown by the ending of Matsuribayashi-hen, he is under the true control of Nomura in 'Tōkōo'. He does not have a hard time accepting defeat in fair battle scenarios, but is prone to jealousy when he overestimates himself against those who are better than him, especially against "that Karate guy."

Okonogi has been the leader of the Yamainu for ten years. He is referred to as their "captain" (隊長・taichō) which could also be translated as "commander." This is not his military rank. He was trained in combat for the Japanese Self Defense Forces and is under their command. Although he has shown himself to be skilled in combat, he was placed in command of the Yamainu instead of the more elite assault unit the Banken due to his calculating and cautious nature.

The Yamainu use codenames in this mission based on birds, such as "Egret," "Skylark," and others. Okonogi is referred to as "Ōtori 1".

It is revealed in Himatsubushi-hen that Okonogi was directly involved in the kidnapping of the Prime Minister's grandson, Inukai Toshiki. He first encountered Akasaka Mamoru and Ōishi Kuraudo here as they successfully took back his hostage. Despite Toshiki being successfully recovered, the dam project was still canceled thanks to pressure put on the Prime Minister from elsewhere.

In Minagoroshi-hen, it is revealed that Okonogi was bribed by Takano to assist her in using Document #34 to wipe out all of Hinamizawa and have her grandfather's research accepted as fact. After Takano's "death," he sets up an elaborate plan to frame Irie as the true mastermind behind Takano and Tomitake's murders.

Most of Okonogi's persona is revealed when he is working actively in Matsuribayashi-hen. In the manga, it is shown that he along with a few other Yamainu were directly involved in the removal of Rika's mother. Up until June of 1983, Okonogi stayed out of the line of action until the day before Watanagashi. He is in charge of all commanding operations regarding the capture of Tomitake Jirō, Rika, and Director Irie. He recalls facing off against Akasaka in the kidnapping case five years before. This does not happen in the anime adaption as his appearance was replaced by a generic Yamainu member during the kidnapping.

During the battle on the mountain, Okonogi becomes visibly irritated with the Yamainu's incompetence as a combat force. He had overestimated the Yamainu's counter-intelligence abilities to believe they could handle themselves in guerilla warfare. With the failure of the plan, he proceeds with his orders to dispose of Takano as the scapegoat. He orders Takano to shoot herself, but when she refuses and runs away, he decides not to pursue her, while playfully chiding himself for going "too easy" on her.

He returns in the new third and fourth seasons of the anime; however, he appears thwarted for reasons that are all spoilers – Arg! – for them. The conclusion of the latter suggests that he is free to happily pursue his interests. 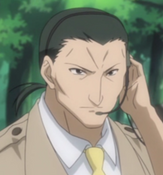 Okonogi as he appears in the Anime

Okonogi's uncredited appearance in season 1 of the anime adaptation

Another uncredited appearance with Chie 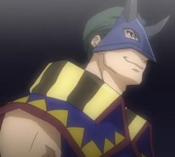 "Future's so bright, I need shades!"
Português do Brasil
Community content is available under CC-BY-SA unless otherwise noted.
Advertisement