Tomitake Jirō (富竹 ジロウ) is a character in the Higurashi no Naku Koro ni series, he is first introduced as an ordinary photographer that specializes in pictures of local birds.

"Tomitake Jirō" appears to be an alias for his cover as a photographer as suspected by Furude Rika in Minagoroshi-hen. Onikakushi-hen's Investigation Memo TIP affirms that "Tomitake Jirō" is only his pen-name. Under this cover, Tomitake visits Hinamizawa every year to photograph birds, he is well known by the villagers, and seems to know quite a bit about the village and its history, thanks to Takano's deep interest in the subject.

Tomitake used to be an expert sniper in the JSDF until an accident that damaged his vision forced him to step down and become an instructor. He holds the rank of first lieutenant, one lower than Okonogi's rank of Captain. He is very skilled in combat. He demonstrates his skill in Matsuribayashi-hen when he shoots the driver's seat of a closely-tailing Yamainu van in order to scare off the driver.

He was recruited by Tōkyō to work as an auditor for the Hinamizawa Syndrome research project.

Tomitake was hired by "Tōkyō" to act as an auditor for the research project. Tomitake is also involved in counterintelligence affairs. He visits the village to evaluate the research on the Hinamizawa Syndrome under his alias as a photographer.

His death in the other arcs was caused by Takano, who injects him with a drug to induce Level 5, causing him to claw his own throat. In the initial final arc, Tomitake is able to avoid his death, thanks to Rika's warning. In the anime-only arcs of the third season, it is revealed that Takano has a change of heart, and Jirō calls in the Banken to halt the plans, while protecting Takano as a witness.

Tomitake is a muscular man with short, light brown hair and eyes. He always seen wearing glasses. While his age is unknown, he is most likely in his mid-to-late thirties.

His "Tōkyō" uniform is a green military style suit over a white shirt and a dark blue tie.

It appears assumed in the village that the two are lovers. Miyo makes their relationship clear when she teases him over whether or not he listens to her when she "talks in bed." Whether they actually love one another depends on the arc. Minagoroshi-hen reveals that Takano tries but fails to convince him to support her execution of Emergency Manual 34 before she arranges for his death. The anime and manga versions depart slightly on the degree to which Takano may love him. In the anime, after inwardly wondering at how she can so easily order his death, she toys with him with her shoe then leaves him with a disappointed look predicting they will not see each other again, whereas in the manga she begs him and promises him her entire body if he will support her plan.

For his part, Tomitake appears to care for her, but he will not compromise his principles. In the final answer arc of Matsuribayashi-hen, despite learning of Takano's plans to dispose of him if he does not support her, he still tries to help her after she is arrested. There are implications that he stands by her afterwards, particularly in the manga version. This is expanded in the anime-only Nekodamashi-hen of the third season where he vows to bring the repentant Takano "home" after the investigation of her is done. The resolution of the Fourth Season reveals that the two remain together and return to Hinamizawa.

As far as the village and main characters know, the two are together with Tomitake often playing the roll of the shy to bumbling boyfriend. Both provide some comic relief as they make suggestions about Keiichi and Mion or Shion to their respective embarrassment and irritation. Their relationship will also serve as a source of comedy in the lighter extra arcs.

When finally convinced in Matsuribayashi-hen of Takano's plans to have Rika murdered, the village destroyed in the Great Hinamizawa Disaster, he works closely with Akasaka, Irie and Ooishi as a key part of the plan to thwart Takano. 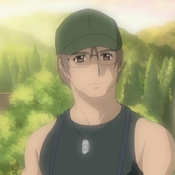 Tomitake's appearance in the anime

Tomitake portrayed by Masashi Taniguchi in the live action movies

Tomitake as he appears in the live action TV drama
Deutsch Português do Brasil
Community content is available under CC-BY-SA unless otherwise noted.
Advertisement